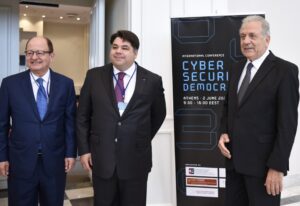 “Enemies of democracy have weaponized technologies that otherwise enrich our lives and they are using them to attack democracy,” Nikias said in his introductory remarks. “To paraphrase Abraham Lincoln, we do not want to see government of the people, by the people and for the people perish from this earth.”

Adam Clayton Powell III, executive director of the USC Election Cybersecurity Initiative, delivered the keynote address at the conference where he outlined the challenges facing those defending democracy.

“In the United States there are so many states and so many election districts that it costs too much and is too difficult for an attacker to change votes. Instead, they choose to cause chaos,” Powell said. “The reality is that we are in a race with no finish line.”

Clifford Neuman, director of the Center for Computer Systems Security at the USC Viterbi School, said, “We have to defend our systems, always. Adversaries only have to breach a system once … This is the bad side of technology. Technology is a force multiplier.” 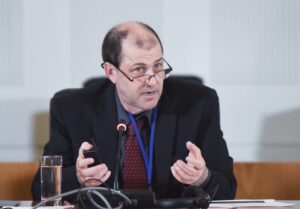 Neuman noted that the prominent Russian TV journalist. Zhanna Agalakova, who resigned over the Russian invasion of Ukraine, said, “My reports didn’t contain lies but that’s how propaganda works. You take reliable facts, mix them up and a big lie comes together.”

Sarah Mojarad, a lecturer in the Viterbi School of Engineering and an expert on social media and science communication defined disinformation as “false information created and spread to intentionally mislead people.” She said it has been around for a long time. In the war between Octavian and Marc Antony, and Cleopatra, which culminated in the Battle of Actium, both sides used “short sharp slogans on coins and poetry to spread disinformation.” 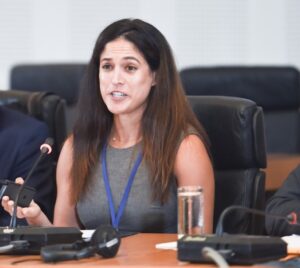 She said “it took a lot of effort to manufacture the coins and poems but today, disinformation has become much easier to create and to spread. It has a stickiness factor, continuing to spread even after it has been debunked … Many people spreading disinformation don’t care if it’s not true.”

Nikias emphasized that democracies have always faced threats from outside invaders or movements from within. “Democracy is not easy. It has never been perfect and it can be quite messy.”

He described ostracophoria, which was an election in ancient Athens to ostracize someone. If the target of the ostracism received 6,000 or more votes, they were banished from Athens for 10 years. There was no appeal and the vote was final. Pericles was targeted several times but was never successfully ostracized. However, both Miltiades, Athens’ general in the Battle of Marathon, and Themistocles, who fought at Marathon and who was the architect of the Athens’ great victory over the Persians at the Battle of Salamis, were ostracized and banished.

“Archeological evidence hints that some ostracisms might have been rigged,” Nikias said. “Citizens voted by scratching the name of the person they wanted to ostracize on a shard of pottery, sometimes adding nasty comments. Thousands of pottery shards found in one archeological dig appear to have been scratched by the same person.”

In his closing remarks, Powell suggested that “instead of cursing the darkness, let’s light a candle. How can digital media be used to promote democracy?” Admitting that he didn’t have the answer, he expressed confidence that one would be found. Powell said years ago the Hungarian ambassador attending an event surprised everyone when he told them what had ended the rule of communism in his country.

Nikias, was a principal organizer of the conference and he leaned heavily on the USC Election Cybersecurity Initiative headed by Powell. Mojarad and Neuman who are associated with the Initiative were both keynote speakers on panels. Other organizers included the Department of International and European Studies at the University of Piraeus and the Council for International Relations-Greece.

The complete video of the conference can be found here. Photos courtesy of the University of Piraeus.