President Emeritus C. L. Max Nikias highlighted an international webinar celebrating the 2,500-year anniversary of the Battle of Salamis between Athens and the Persian Empire.

“The Battle of Salamis is the ancient equivalent of the American Revolution, Civil War and World War II,” said Nikias who holds the Malcolm R. Currie Chair for Technology and the Humanities and is the director of the USC Institute for Technology Enabled Higher Education. “Without the Greek victory, democracy could have perished and the 200 years of Classical Greece that so heavily influenced Western civilization may not have occurred.”

On September 29, 480 BCE, a heavily outnumbered force of Greek triremes led by the Athenian Themistocles defeated the Persian Empire’s navy in the straits between mainland Greece and the island of Salamis near Athens. While many details of the battle have been lost to history, it appears that the Persians, led by King Xerxes I, were lured into the narrow waterway where they crowded together and became disorganized. The Greeks then formed a line and routed the Persians. The decisive Greek victory ended the second Persian invasion of Greece and essentially won the Greco-Persian War.

Rather than the actual battle, Nikias focused on its aftermath and the great Greek tragedian Aeschylus. In addition to being a playwright, Aeschylus was soldier who fought at Marathon and probably at Salamis. His brother died at Salamis. Only eight years following the naval battle, he presented his tragedy, The Persians, in which he took a stunning artistic risk by depicting the battle from the point of view of the enemy Persians.

Though the audience contained heroes and veterans of the Persian wars, and many citizens who had been driven from their homes when Persian soldiers sacked Athens weeks before the naval battle, Aeschylus was awarded the top prize. 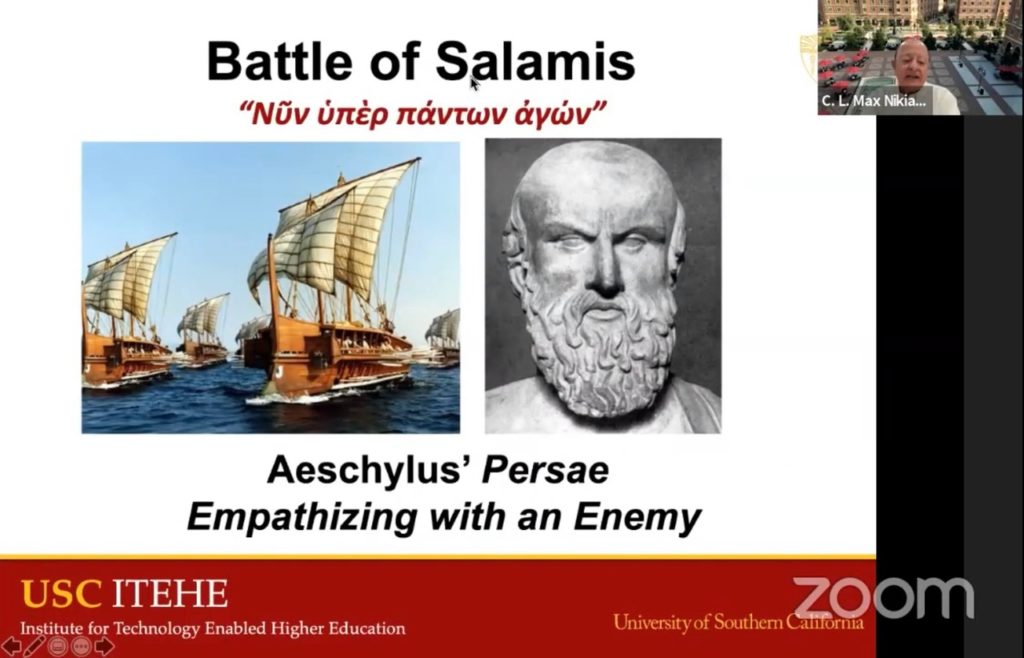 Another screen shot of a PowerPoint slide depicting the Greek triremes and Aeschylus.

“Aeschylus had the courage to empathize with the enemy and portray the opposition as flesh-and-blood mortals with the full range of human hopes and fears and suffering,” Nikias said. “He began a grand tradition in which artists confront their audience, challenging them to carefully consider the moral paradoxes and consequences involved in successfully defending liberty.”

In addition to empathizing with the enemy, the play called on Athenians to identify with the hubris of the Persians that led to their defeat.

Konstantina Botsiou, associate professor of history and political science at the University of Peloponnese, said, “The Battle of Salamis showed that military supremacy was compatible with democracy and proved democracy could win wars.”

“Salamis transformed Athens from an agricultural state into a major naval power,” said Athanasios Platias of the University of Piraeus. “Their democratic reforms became a strategic weapon.”

After defeating the Persians at Marathon, a decade prior to Salamis, the Greeks had watched in horror as the Persian Empire prepared for a new and massive invasion. All factions among the Athenians—the elders, military veterans and the underclass—contributed their views in open discussions. Citizens finally voted to build a navy, and later decided to use that navy to fight rather than to flee.

“We now live in a world made possible by decisions resulting from a democratic process,” said Josiah Ober, professor of classics and political science at Stanford University. “Herodotus’ account of the Athenian assembly allows us to reconstruct a rational process that successfully aggregated vital information essential to making the best choice among the available options.”

“The rationality of the Athenian decision-making rebuts the charges leveled by Plato and by modern elitist critics of democracy who claim that democracy is inherently irrational,” he added. 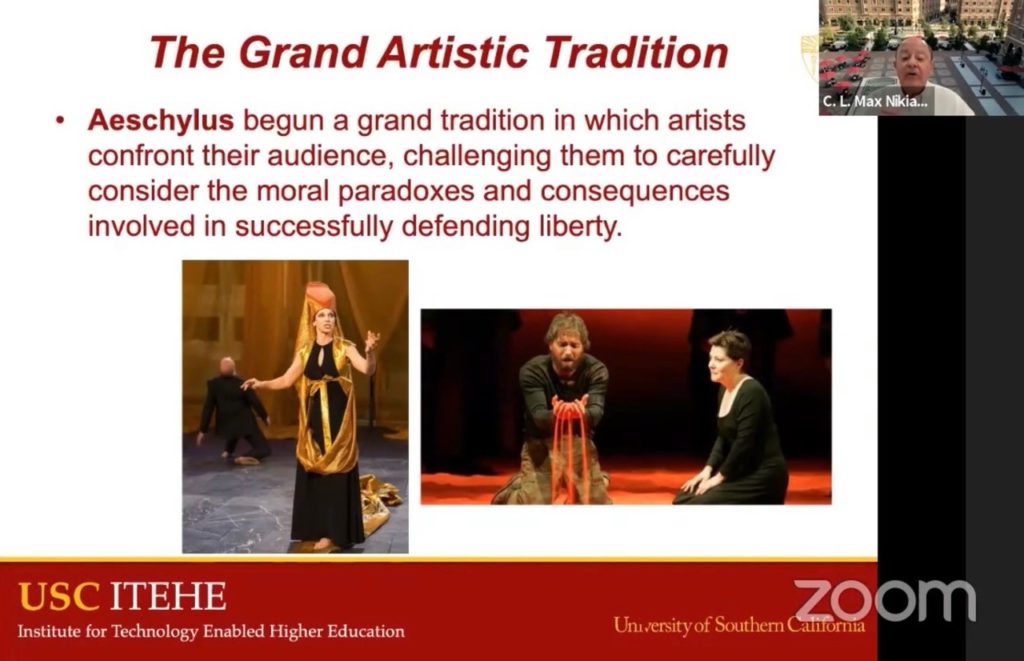 ‘The Persians’ sparked a grand artistic tradition and continues to be performed today.

Nikias noted that The Persians, and its themes, have continued to reverberate through the centuries influencing the Jewish 2nd century BC tragedian Ezekial (Exagoge), Christopher Marlow (Tamburlaine the Great), John Milton (Paradise Lost), Percy Bysshe Shelley (Hellas) and Lord Byron. The play itself continues to be performed and has become particularly trendy in recent decades.

“The plot is about an invading superpower and the hubris displayed by leaders to conquer a minor enemy on the periphery of the empire. It also involves bad intelligence, a failed military invasion and a David and Goliath analogy,” Nikias said. “Anti-war theatre loves The Persians’ plot!”

In 2006, Clint Eastwood’s movie, Letters from Iwo Jima, unlike virtually every other film about World War II, humanized the Japanese enemy. “Eastwood stepped forward as the next in the great line of classicists who use the full power of the arts to display the humanity of an enemy. To understand Aeschylus’ artistic courage in our age, imagine that instead of John Wayne’s Sands of Iwo Jima being released in 1949, Eastwood’s Letters from Iwo Jima had been released instead.”

“Aeschylus’ grand democratic tradition proved that the right of dissent and free speech strengthens our citizens because when we disagree with an artist, we are reminded how healthy disagreements demonstrate our advantage over closed societies.”

The webinar was organized by the Department of International and European Studies at the University of Piraeus and the Council for International Relations – Greece.

The complete webinar can be found here.