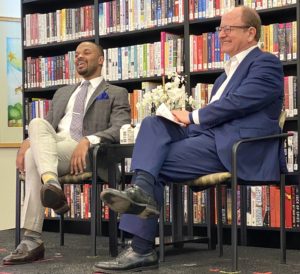 Zachary Wood, author of Uncensored, a brutally honest and gripping memoir of a young African American man’s struggle to rise above poverty and racism, shared his unique perspectives on free speech, race and education with USC Professor and President Emeritus C. L. Max Nikias at the Rancho Mirage Writers Festival.

“Colleges across the country should embrace free debate because every student in America would be better off improving their ability to defend their own ideas rather than hoping that their ideas prevail by censoring those that disturb them,” Wood said.

As an undergraduate at Williams College he was president of a student group, Uncomfortable Learning, dedicated to bringing speakers offering starkly different viewpoints from those found at his school. The speaking invitations triggered uproars on campus and personal attacks on Wood.

“Preserving free speech on campus today is a major challenge given the nation’s polarization. I have to admire Zachary for meeting it head on,” Nikias said. “He is a very polished and impressive young man with a vision to get into public service, most likely politics.”

The conversation began on a somber note, however. Basketball great Kobe Bryant had died in a helicopter accident only a few days previous and Bryant was one of Wood’s most influential role models.

In his book he writes, “Kobe Bryant studied predators to perfect his ability to attack and dominate other players. I studied the behavior of sharks, lions and gorillas to gain a deeper understanding of the animal instincts and basic drives and needs that make people kill, cry, compete, and even love.” 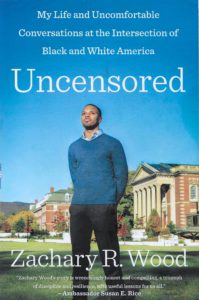 “In his book, he talks about why basketball is so important to African American boys growing up in challenging socioeconomic circumstances,” Nikias said.

“They didn’t have music lessons and swimming lessons but they did have basketball,” Wood wrote. “Basketball was free and the court was their turf, the one place where they could fully express themselves and feel a certain amount of dignity and self-respect.”

Wood told Nikias that President Bill Clinton was another of his idols and his most important political role model. He admired the former president because “he spent a lot of time with people in all walks of life asking them how they made a living. He worried about them.” He added, “when he answered a question, he looked you in the eye. He made you feel like the most important person in the room.”

Wood grew up first in Detroit where he lived with his educated but mentally ill mother who also abused him. Eventually, Child Protective Services removed him from her home and sent him to live with his father in Washington, D.C. There, he lived in terrible poverty in one of that city’s most dangerous neighborhoods.

Through it all, Wood attended elite private schools with scholarships earned through academic merit. He out-competed most of his white peers through sheer hard work. He found time to tutor younger students. 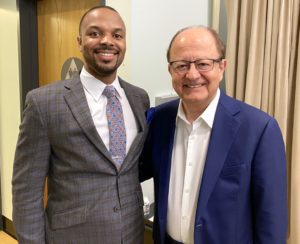 “Wood’s white peers would say things like, ‘Do black people come from apes?’ or he’d be asked to impersonate President Obama. He refused to let it bother him,” Nikias said. “Instead, he’d help his friends with their homework and their papers. He’d make reading suggestions. He’d even help their younger brothers or sisters.”

Nikias closed the conversation by telling the audience, “You are looking, perhaps, at a future president of the United States.”