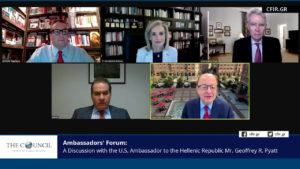 “It makes me terribly homesick to see your background there with the USC campus,” said Pyatt, whose daughter graduated from the USC Marshall School of Business in 2016. 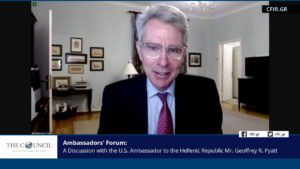 “As Professor Nikias pointed out in his opening remarks, there is an indelible tie between the Greek Revolution and the American Revolution,” Pyatt said. “We have to understand that there has begun now a great battle between two different models of how society should be administered. One taken from what the ancient Athenians set in place 2,500 years ago, grounded in the rule of law, individual liberty, democratic accountability of leaderships; and another model which is authoritarian, which uses technology surveillance to place sharp limits on individual freedom, and which is premised on the strengthening of the state over the individual.” 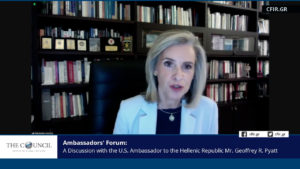 Konstantina Botsiou, associate professor of modern history and international politics and vice rector at the University of Peloponnese

“Values matter to my President,” Pyatt continued. “Whether the issues that we’re working together on are climate change, the global pandemic, or the rise of China and the consequences that has for our national interests, we start from the premise that we have no stronger partners than our democratic allies, and Greece is proudly at the front of that line.” 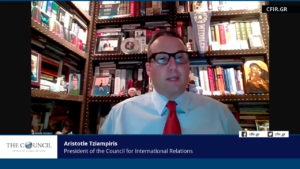 Aristotle Tziampiris, professor of international relations at the University of Piraeus and the president of CFIR-GR 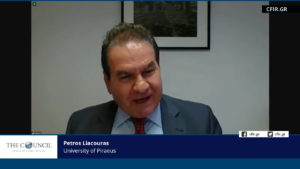 Petros Liacouras, professor of international law at the University of Piraeus

In a discussion on European energy concerns, Pyatt noted that Greece is emerging not only as a regional energy hub but as the digital hub of southeastern Europe.

The ambassador said, “it’s incredibly exciting for me to see what’s happening in Thessaloniki with U.S. technology companies like Cisco, like Pfizer, but also the huge new investments that are being made here around Athens by Microsoft, by many of our top technology companies who are viewing Greece as a natural partner as they seek to grow their footprint in southeastern Europe.”

Regarding security issues, Pyatt said that Greece straddles “an arena of strategic conflict because it is the place where the Eurasian land mass comes together. It’s where Europe, the Europe of values, the Europe of democracy, collides with Eurasia and all the challenges that Eurasia historically has produced.” 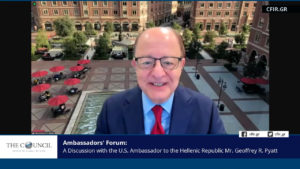 A Southern California native, Ambassador Pyatt is a career member of the Foreign Service. President Barack Obama nominated him as ambassador in 2016. He retained the post through the Trump Administration and continues to serve under President Joe Biden. He was the U.S. Ambassador to the Ukraine from 2013 to 2016 and during more than 30 years in the Foreign Service, he has served in Austria, India, Hong Kong, Pakistan and Honduras.

“He is, in short, a seasoned diplomat,” said Nikias. “His continuance as ambassador through three administrations reflects the high regard in which he is held and the importance America attaches to its relations with Greece.”

A transcript of the CFIR-GR Ambassadors’ Forum can found here.

Nikias is the president of the CFIR-GR International Advisory Board.