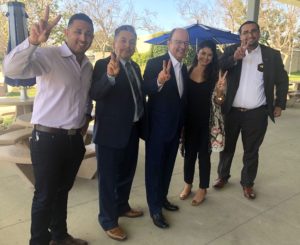 “I’ve long been an advocate for increasing transfer student enrollments from community colleges,” Nikias said. “They are excellent students, many of them come from challenging socioeconomic conditions so they increase the diversity on campus. They are very committed to succeed. At USC they have the same graduation rates as the rest of the university.

“Community college transfers also become very loyal alumni. They never forget that USC gave them a chance to get a bachelor’s degree.”

Sociology Professor Alberto Pimentel, who received his Doctor of Education degree from USC, arranged the visit and hosted Nikias for the classroom meeting attended by approximately 70 students. 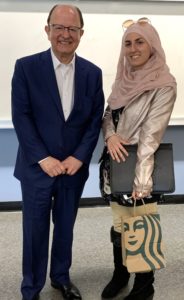 While transferring to a four-year institution was the main topic of discussion, the students also raised immigration issues.

Many of them are part the DACA (Deferred Action for Childhood Arrivals) program created under the Obama Administration. Known as “Dreamers,” these are undocumented immigrants brought to the U.S. by their parents when they were very young. Many have known no other home. The DACA program temporarily protected Dreamers from deportation but Congress and the current administration has so far failed to find a permanent solution.

An immigrant himself, Nikias has lobbied in Washington to allow DACA students to remain in the U.S.

In an article for The Hill published in 2017, he wrote, “Beyond the conflict of values involved in balancing humane considerations with legal and security considerations, there is another pragmatic issue at stake: the reversal of DACA puts our nation in the precarious position of having invested in the education of 10,000 university graduates per year—yet walking away from the enormous economic and cultural benefits this investment would reap.

With his wife, Niki, Nikias came to the U.S. 40 years ago with the dream of a better life through better education. “I remember when our flight landed in New York how optimistic we were about the future,” he said. “With the legal peril they face, I can’t imagine that same optimism among DACA students today.” 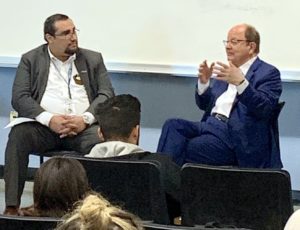 He noted that as institutions of higher learning, universities can only do so much for DACA students. The problem must be solved Congress and the president.

“I hope to set up a partnership between my USC Institute for Technology Enabled Higher Education and community colleges to enlarge the pipeline for students transferring to four-year degree universities.”