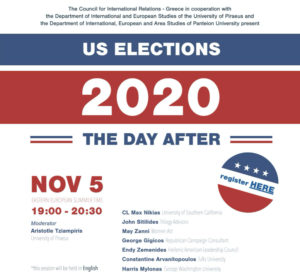 Nikias opened discussion by saying, “I’ve had many friends who have called and texted me from Greece and Cyprus the last couple of days who are very confused about the Electoral College system that we have here in the United States.”

The webinar, organized by the University of Piraeus and the Council for International Relations – Greece, took place November 5, two days after Americans cast their votes and when the outcome of the presidential race was still very much in doubt.

“Technically, people actually voted for a slate of electors appointed by their state’s political parties,” Nikias explained. “On December 14, those electors will vote for president and vice president. And only then will we have an American president-elect.”

Nikias said that Alexander Hamilton, with some help from James Madison, was the architect of the Electoral College system, which he outlined in Federalist Paper Number 68. When they designed America’s government, the founding fathers were worried about more heavily populated states overwhelming smaller states. “So they designed a federated government that was a mixture of representation by both population and states.”

He noted that the U.S. Supreme Court recently, and unanimously, ruled that a state’s electors must vote for the candidate that received the majority of their state’s votes and can be removed and punished if they fail to do so.

“Except for two states, Maine and Nebraska, it’s a winner take all system,” he said.

“The number of electors for each state is equal to the sum of its two senators plus the number of the state’s members in the House of Representatives.”

California, with a population of 40 million, has 55 electors or roughly one elector for every 700,000 people. Wyoming, the state with the smallest population, has three electors, one for every 190,000 people. 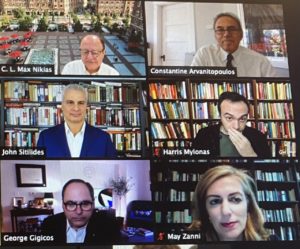 There are currently 538 electors so 270 electoral votes are needed to win.

“It is possible for the electoral vote to be tied, in which case, the House of Representatives chooses the president with each state’s delegation getting one vote,” he said. “It has only happened once, in the election of 1800, when Thomas Jefferson and Aaron Burr received the same number of votes. The House chose Jefferson, largely through the lobbying of Alexander Hamilton.”

According to Nikias, people living in lightly populated rural areas gain power through the Electoral College system. “That makes it more difficult for presidential candidates to ignore their views.”

Nikias said that the winner-take-all aspect of the Electoral College turns any state where popular support could swing to either candidate into a battleground state. “The more electoral votes that are at stake, the harder candidates work to win that state’s popular vote.”

Neither presidential candidate spent much time campaigning in California or New York, the two states with the largest populations because both of those states have voted for Democrats year after year.

“They only came to California for fundraising events,” Nikias mused.

He explained that changing the Electoral College would require an amendment to the constitution approved by both the House of Representatives and the Senate by a two-thirds majority. Then three-fourths of the states—38 states—would have ratify the amendment.

“In my opinion, given the process, it’s not likely the Electoral College will go away anytime soon.”

And at the close of the discussion, Nikias made it clear he did not think that was a bad thing.

“Let’s not forget that this federated system, this Electoral College system, keeps the country together,” he said. “If it was done by the popular vote, the East Coast and the West Coast, every four years would elect a president. The rest of the country, whatever they voted, it wouldn’t matter.

“That’s what our founding fathers intended. Otherwise, the United States would have become like Europe where you have so many countries disappearing and being created in the last 200 years. The United States stays strong and united, and yes, after the Civil War, it’s better that we argue and battle with words and use the institutions of democracy instead of bearing arms and killing each other.”

The entire webinar, which featured a panel of seven people from a mix of American and European institutions can be found here.

The webinar, which is in English, was followed by a second webinar in which a different panel speaking Greek discussed the election.