President Emeritus and Professor C. L. Max Nikias recently returned from trip to Athens, Greece where he worked to establish research collaborations between his Malcolm R. Currie Chair in Technology and the Humanities and two Athens-based universities. At the University of Piraeus, Nikias delivered a lecture at the Laskaridis Foundation Library entitled, “Online Education: The Promise and Challenges.” 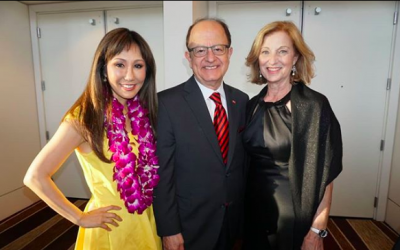 The USC Asian Pacific Alumni Association (APAA) recently celebrated its 35th Anniversary. University president C.L. Max Nikias attended the Awards Gala with his wife, Niki C. Nikias, to celebrate alongside organization members, and to meet some of the 100 young men and women who benefit from APAA scholarships.

The APAA also honored several great Trojans for their outstanding contributions to USC and to society at large. Los Angeles Dodgers photographer Jon Soohoo and entrepreneur Sabrina Kay each won a leadership award 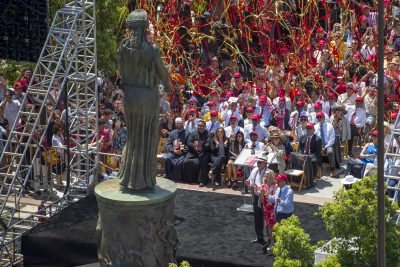 The Trojan Marching Band, led by its Trojan warrior in full regalia, led hundreds into the medieval Tuscan village.

You know, the type of medieval village with a Starbucks, Trader Joe’s and lodging for 2,500 students.

“Let’s follow them!” a woman shouted from the crowd.

USC Village, the university’s massive development at the corner of Hoover Street and Jefferson Boulevard, officially opened to the Trojan community Thursday on the same day as the annual new-student convocation.

Not only is it the largest development 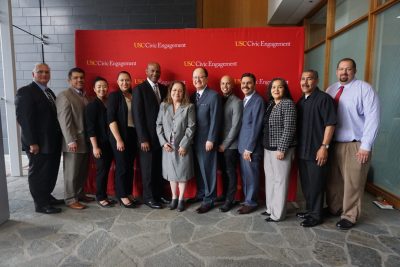 The competition for biotech investment is escalating, and USC President C. L. Max Nikias wants to make sure Los Angeles emerges a winner.

“Los Angeles finds itself falling behind in the race for the future of this increasingly important industry,” Nikias told attendees of USC’s Business of Biotech event, which recently brought together community, business and university leaders.

The USC leader envisions a biotechnology park in east Los Angeles on the Health Sciences Campus. The development could provide thousands of construction and biotech jobs. 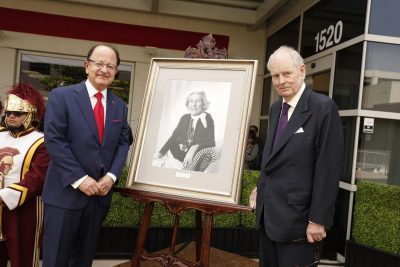 The W. M. Keck Foundation is giving $10 million to support a USC Health Sciences Campus facility critical to advanced patient care, expanding upon the foundation’s longstanding and transformative support to the university.

The generous gift names the Willametta Keck Day Healthcare Center, one of USC’s largest outpatient facilities, which houses Keck Medicine of USC clinics that cover almost all medical disciplines, from primary care to surgical specialties. With the gift, the foundation adds to the $150 million it provided in 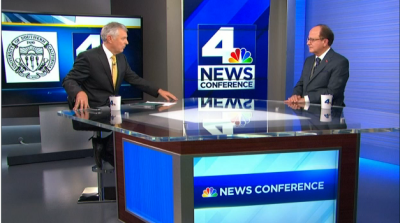 Nearly two years ago, NBC4’s Conan Nolan spoke to USC President C.L. Max Nikias. On May 14, 2017, Nikias returned  to provide an update on a wide range of topics including USC Village, national rankings, fall admits and diversity and inclusion.

Nikias discussed his excitement about the fall opening of USC Village, which he said would transform not only the USC community, but  the entire neighborhood. The Village includes six buildings that house residential colleges, retail stores such as Target Express and Trader 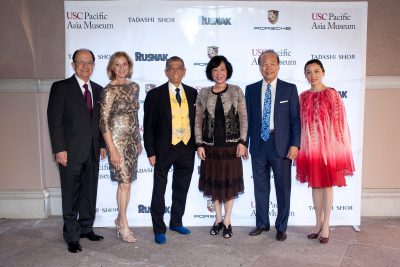 The USC Pacific Asia Museum hosted its annual gala on Saturday, June 10, 2017 at the  Langham Huntington Hotel in Pasadena. The gala honored Legacy Award recipients Dr. Tei-Fu Chen and Dr. Oi-Lin Chen of the Chen Art Gallery, for their promotion of Asian art and culture through their gallery collection.

The recipient of the Visionary Artist Award was Tadashi Shoji, a fashion designer and creator of Tadashi Shoji and T by Tadashi clothing labels. Shoji received the award for his contribution in promoting Asian 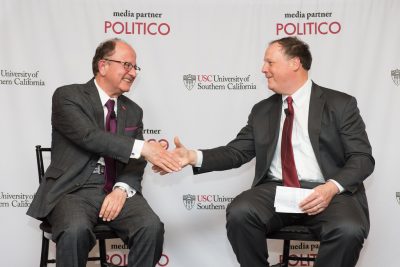 USC President C. L. Max Nikias led a group of trustees and university leaders to the nation’s capital on April 26 for a series of meetings with legislators. In the evening, he hosted USC’s annual reception for more than 200 alumni, elected officials and political staffers. This year the university revamped its alumni reception to promote the release of its Blueprint for Expanding the College Pipeline. Nikias engaged in a discussion about college access 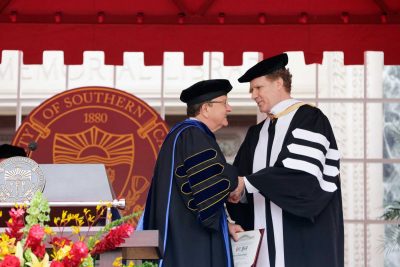 Will Ferrell ’90 has long trod the sidelines of USC football games, led the team onto the field of battle and returned for campus events on behalf of charities like Cancer for College. But none of the more than 60,000 people attending USC’s 134th commencement Friday knew quite what to expect when one of the university’s most famous alumni took to the stage.

The Trojan Family sent out 17,144 new graduates into the world, with the newly minted graduates representing more than 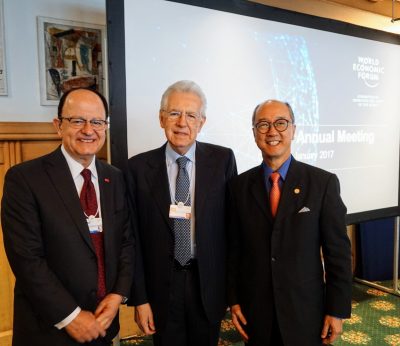 USC President C. L. Max Nikias returned to Los Angeles from Davos, Switzerland, after attending the 2017 annual meeting of the World Economic Forum (WEF). The annual gathering brings together industry leaders, policy makers and heads of state from across the world. Discussions focused on a theme of ‘responsive and responsible leadership’ and examined topics such as globalization and the societal impacts of key technological advances.

During the week, Nikias participated in the annual meeting of the Global University